For the past couple of days, I’ve been feeling weighed down by the stress and the hostility that’s bouncing around the Web these days (can this election just be OVER already?). To counter it, here are a few things to make you smile.

The Camino isn’t just a walk across the countryside — it’s also a chance to see beautiful, spectacular, awe-inspiring art, most of it religious, collected over centuries. From the towering architecture of cathedrals to the details that separate Classicism from Baroque paintings, the Way of Saint James can become a long lesson in fine art.

But if you look carefully, not everything is majestic. Artists through the centuries have made some pretty quirky, comical (intentionally or not) things.

So here, in an (Almost) Wordless Wednesday style, are three of my favorite “wait, is that what I think it is?” pieces of religious art, seen along the Camino Frances (St. Jean Pied-de-Port to Santiago) and the Chemin du Puy (Le Puy to St. Jean Pied-de-Port). 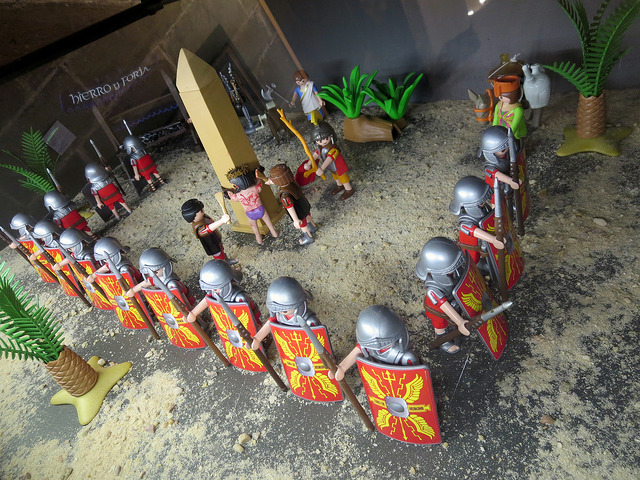 Probably the strangest thing I saw was the gallery of dioramas, all using Playmobil figures, depicting the Stations of the Cross. Yep, that’s Jesus, complete with a crown of thorns, being whipped by Roman soldiers. Many of my childhood memories are now officially ruined.

(Seen in the Monasterio de Santa Maria La Real in Najera, Spain. I think it was a temporary exhibit, mixed among the museum-like displays of much older relics and art. Which just made it stranger.)

The earliest stained glass windows of Christianity were usually designed to tell a story to an illiterate population. I’ve seen many images of Jesus and his miracles, and plenty of heroes from the Old Testament to the early church. But this is the only window I’ve ever seen that depicts a woman (Salome, daughter of Herodias) holding a man’s head in a basket.

(Found in a small chapel somewhere between Lascabanes and Lauzerte, France.)

And finally, there’s this, which at first glance is a fairly typical religious statue of a guardian angel and child. But then look again. Is that a piranha? And is it smiling, or trying to eat the angel?

What about you? What were the strangest or most memorable bits of religious art that you found along the Way?

2 thoughts on “The Unexpected Art of the Camino”

♥️❄️
Still snowing.
Six years ago, I put everything on hold and went to the Camino de Santiago seeking tranquility in a world that had become increasingly noisy and chaotic.
I was reminded this morning that I haven't posted a cat pic in a while. So here's your weekly dose of Roo, and your reminder to take advantage of every patch of sun.
Because sometimes, even in January, you just need to turn everything off and spend a couple of days with the ocean.
"All people, except this rich cream, living and scraping and fighting and dying, and for what, nothing, the cold millions with no chance in this world."