The town of Santo Domingo de la Calzada was bound to be one of my favorite stops on the Camino Frances, because I’m a sucker for a town with a good story, and Santo Domingo’s is a Camino classic. 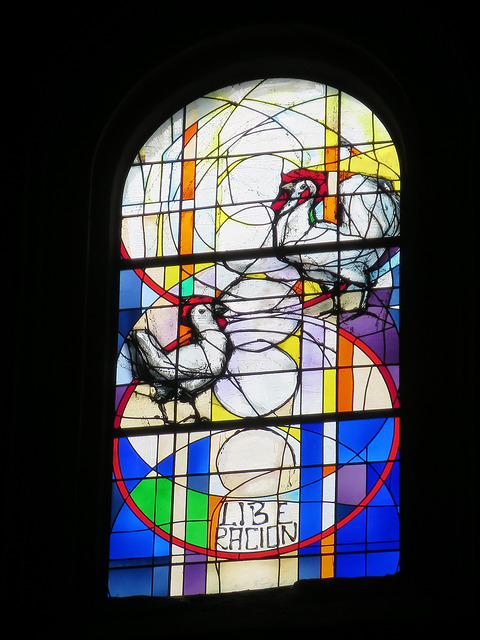 Like most good seven hundred-year-old legends, the details vary, but here’s the basic idea:

A devout German couple was making the pilgrimage to Santiago with their eighteen-year-old son. When they reached Santo Domingo, a local girl took a liking to the young German, who, being a good Christian, did not respond to her advances.

Hurt and angry, she put a silver cup into his bag and accused him of theft. The town believed her and hung the innocent boy. His parents, although they were sad, went on to Santiago, where they prayed for their son. On their return trip, they again stopped in Santo Domingo, this time to visit their son’s body. To their surprise, he was still alive, and still hanging from his rope. (At this point I always wonder how they didn’t notice that part before they left, but it’s best not to ask a lot of questions about these stories.) In some versions of the story, the boy spoke to them and told them that Saint James himself was keeping him alive. The parents rushed to the town’s sheriff and demanded that he release their son.

The good sheriff was just sitting down to a hearty poultry dinner, and laughed in their faces. “That boy is no more alive than these chickens on my plate,” he said.

(See where this is going?)

Yep, the roasted birds sprouted back their feathers and beaks, got up, and started walking around the dinner table. Properly chastened, the sheriff rushed to the gallows and released the young German, who was pardoned and allowed to go home.

The story spread, lending credibility (of sorts) to the Santiago pilgrimage and drawing spiritual tourists to Santo Domingo itself, which petitioned the pope to allow them to display two birds, a hen and a rooster, inside the church as a symbol of the miracle.

Which makes the cathedral, to me, forever known as the Chicken Church. (Sorry, Saint Dominic. You have some pretty great stories yourself.)

We arrived in town in the early afternoon, and I willingly shelled out a few euros to witness firsthand the glass box, set high in the wall of the sanctuary itself, with two bored-looking birds pecking around. They’re rotated regularly, I’m told, from the coop supported by the local Confraternity albergue.

The chickens were fun, and the museum of religious artifacts built into the original cloister is full of the icons and images that defined early Christianity. But the real surprise of Santo Domingo’s cathedral, and the part not to miss if you’re the adventurous type, is up an unmarked (at least when we were there) spiral staircase in the back of the grand space. 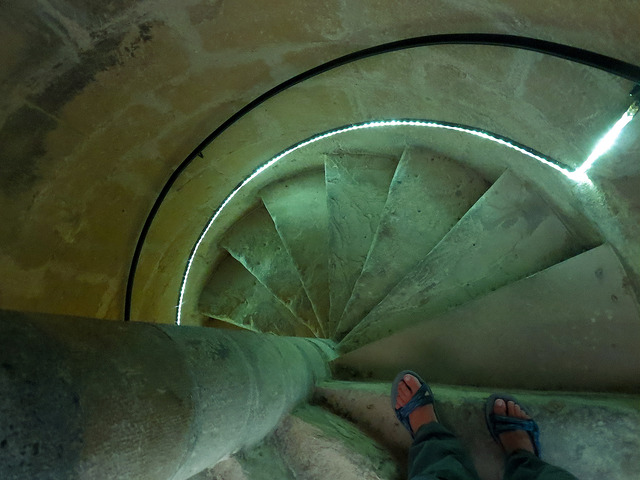 I don’t know if I would have been brave enough to take them on my own, but I was in the wake of two urban explorers, and they had disappeared around the corner before I could utter my first squeak of “we’ll get in trouble!”

We didn’t get in trouble, of course. The stairs lead to defensive corridors that surround the cathedral, when the thick walls of a town’s church protected more than just the souls of its parishioners, with narrow windows overlooking the street, and then all the way up to the roof.

Santo Domingo’s old city spread around us, with the remnants of the old defensive walls now supporting a whole colony of storks. 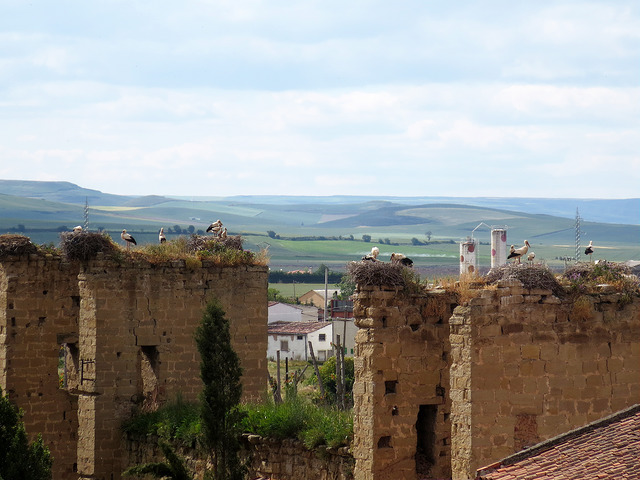 Eventually we crossed the square to the cathedral tower, which is oddly not connected to the actual cathedral. The sign said it’s because it had a habit of falling down. The stairs led all the way to the bells themselves, so we waited until the hour struck, and the giant brass bells swung and tried to deafen us all.

And then we came down and snacked on cookies shaped like chickens, because tourism thrives on good stories as much as I do.

9 thoughts on “The Chickens of Santo Domingo de la Calzada”