Laurel and I stopped for the night in Azofra, a tiny town between Logroño and Burgos. The town’s major claim to Camino fame is that the municipal albergue has two-person cubicles AND a fountain in the courtyard where pilgrims can soak tired feet.

When we arrived, our new friend, John, mentioned that Azofra offered another opportunity: just five kilometers off the trail, near Cañas, was an active abbey worth visiting. And then he reminded me of something I rarely considered: we didn’t have to walk there. (I can get pretty single-minded on the Camino. I’m here to walk, so anything that’s not directly in my path is outside my range.)

So once we settled into the albergue (and soaked our feet in that lovely pool for a while), John arranged for a taxi to pick us up and whisk us – at speeds that seemed impossibly fast – to the gates of the Abadía de San Salvador – or, as the website calls it, the Monasterio de la Luz (the Monastery of Light). It was late afternoon and mid-week, so the place was mostly deserted. There was no sign of the community of sisters who had been living there since the 12th century, and only a few other tourists wandering the museums and cloisters.

The silence of the place struck me, but even more, I noticed the simplicity. The walls were mostly bare, the windows muted.

Even the statues were simple. 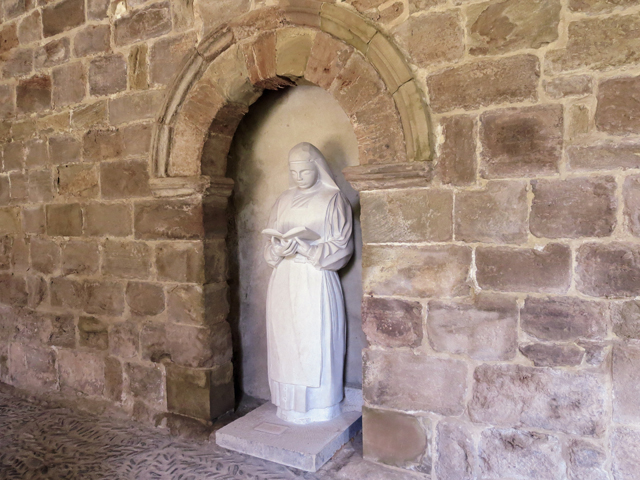 A single paragraph in the English brochure explained it:

Of the finest and purist Gothic style, following the rules of austerity imposed by the Cistercians and eliminating the excess of ornamentation in the temple, its main characteristic is white light, which St. Bernard considered divine grace of God.

I knew next to nothing about the Cistercians, but I immediately liked them. While most of the churches and historic buildings in Spain were overwhelming in their ornamentation (I’ve written about the Church of the Sensory Overload before), this was decidedly, stunningly, austere. It was calm. Even the stained glass was intentionally muted, creating a place of peace. 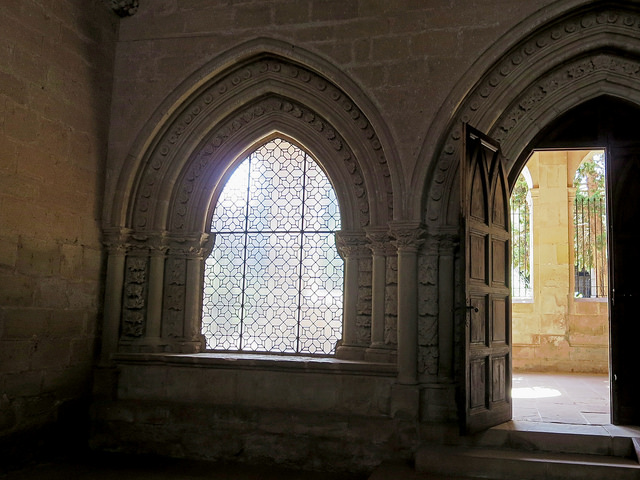 I thought about all of this again yesterday, when I went for a walk in the woods near home as a way to work off the Thanksgiving over-indulgence and lethargy. The afternoon wasn’t what most people would consider “ideal hiking conditions.” That is, it was raining pretty steadily the whole time I was outside. (But hey, I’m in Seattle; if we stayed inside every time it rained we’d never go anywhere.)

It was mostly a misty rain, coming from a pale sky. The light around me, even through the raindrops, was, I realized, white. The woods around me, bathed in pale grey, were peaceful.

Saint Bernard, founder of the Cistercians, lover of white light, found much of his inspiration, it turns out, outdoors:

Believe me, you will find more lessons in the woods than in books. Trees and stones will teach you what you cannot learn from masters.

It’s a good reminder as we head into December. In this season of excess and ornamentation, may you each find a few moments of peace and white light among the trees and stones.

2 thoughts on “The Monastery of Light”

We were only in Idaho for a brief 80 miles, but I figured we didn't really visit a state unless we got out of the car and walked around a bit. So we found a shortish hike off a long dirt road near Bonners Ferry, and at the end discovered this quiet little bit of #waterfall paradise.
Scenes from a road trip, Day 1: eastern Washington
We're just back from 18 days on what I keep calling The Great Northern Road Trip.
I hear that one should never give away the exact locations of their mushrooms, so let's just say that we had a good adventure somewhere in the Alpine Lakes Wilderness last weekend. 😉🍄🍂🏞️🍁
It's a grey, wet, hard Monday all around, and deadlines loom, but my coworker keeps trying to get me to take a nap. 🐱🌧️👩‍💻🐱
The Grove of the Patriarchs was the high point of our day passing through Mount Rainier National Park, despite the rain. There's nothing like the majestic trees of the Pacific Northwest, especially at the cusp of fall.