Today is the Catholic Feast of Corpus Christi. It’s not a date that draws a lot of attention in the United States, but four years ago I encountered it in full measure in Spain, where it seems no festival or saint or holy remembrance goes unacknowledged, and I’ve been curious about it ever since.

We were in León, where we’d taken a rest day from our pilgrimage on the Camino de Santiago to explore the city and wait for friends to arrive. Our base for the night was the church-run albergue, the Albergue del Monasterio de las Benedictinas.

We toured the cathedral, watched the crowds, and ate as many tapas as we could. We ended up in the cobblestone courtyard in front of the albergue, splitting our attention between a fútbol game on an outdoor TV, and the two older Benedictine nuns who moved from window to window in the convent above the albergue, hanging red and green buntings from the windows. 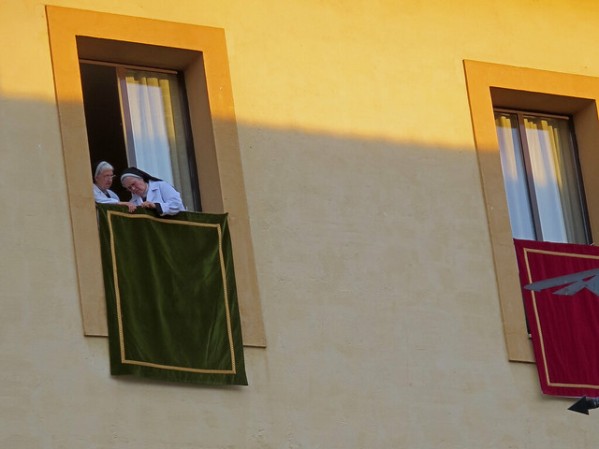 The next day, someone in the square told us, was the Feast of Corpus Christi. There would be a parade and a festival in the church.

According to The Catholic Company:

St. Juliana of Mont Cornillon in Belgium (1193-1258)…was a nun and mystic who had a series of visions in which she was instructed by Our Lord to work to establish a liturgical feast for the Holy Eucharist, to which she had a great devotion.

After many years of trying, she finally convinced the bishop, the future Pope Urban IV, to create this special feast in honor of the Blessed Sacrament, where none had existed before. Soon after her death, Pope Urban instituted Corpus Christi for the Universal Church and celebrated it for the first time in Orvieto in 1264, a year after the Eucharistic Miracle in Bolsena.

We didn’t stay in León. One rest day here was enough. Instead, we woke in the golden dawn and wound out of the city and across twenty kilometers of open land to Mazarife.

We were crossing a field, the town already in view, when the explosions started. At first, I thought they were gunshots. Was someone hunting in June? Someone else suggested that a farmer was shooting blanks in order to frighten birds off the crops. That made more sense, and I just hoped we didn’t look like birds.

When we checked into our small albergue, our hospitalera mentioned Corpus Christi. “The parade will start after the noon mass.”

We were always game for a parade. So soon as we’d washed the road dust from ourselves and our laundry, we set off to explore.

We found the church set above the small-town square, a modest building with three giant stork nests in the belfry. A few other people gathered in the limited shade. They didn’t say anything, but there was anticipation in the hot summer air.

Shortly after we arrived, a solemn-faced band of men and women with bagpipes and wind instruments assembled and waited. They wore traditional dress, the women in long skirts and head scarves, the men in vests and jaunty red cummerbunds.

They pointedly ignored us. 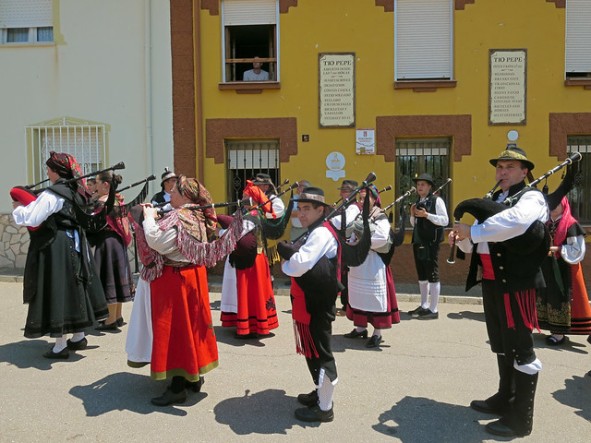 Finally, the bells in the tower began to rock, just a little at first, and then with such vigor that they spun all the way around in noisy celebration of…well, whatever Corpus Christi celebrated. The storks flew away. The church doors swung open, and the parade started.

“Very early (in the fourteenth century) the custom developed of carrying the Blessed Sacrament in a splendid procession through the town after the Mass on Corpus Christi Day. This was encouraged by the popes, some of whom granted special indulgences to all participants. The Council of Trent (1545-1563) solemnly approved and recommended the procession on Corpus Christi as a public profession of the Catholic faith in the real presence of Christ in the Holy Sacrament.

A man walked in front of the children, and I saw that he was holding a long tube. He fiddled with it, and then boom, we had found the source of those explosions.

The band played, and the parade moved off. We stayed where we were. Somehow, it felt rude to follow them. A religious celebration like this was no place for tourists.

Corpus Christi is then an opportunity for us to carry the Living Christ out into the world for all to see. This being such a momentous event reflective not only of our faith but the Catholic family as a whole, it has become customary to dress well for Eucharist procession; Sunday best no matter the day… Carrying Christ through the streets in celebration of his life, resurrection, and infinite grace, we publicly testify to our faith in life everlasting and victory over death.

Instead, we retreated to the shade of the local bar, ordered a pitcher of sangria to share with other pilgrims, and waited for the party to come to us. It didn’t take long. (Mazarife is a town of just 350 people, clustered on a few streets.) The families from the parade came back and filled the space, still in their fancy clothes.

The procession was done, and the celebration was just beginning.

70 degrees and sunny...perfect time for a nap on a channel marker, if you're a sea lion. Or for a paddle in the Sound, surrounded by seals and crystal clear water, if you're anyone else. (Those two seals played peek-a-boo with me for at least half an hour, swimming under my boat and popping up on a different side, then wrestling with each other, then swimming alongside me again for a while.)
They smelled as good as they looked.
Throwback Thursday:
Hail on the trail? Just for a few minutes, and worth it for the payoff view at the top.
With all of the unsettledness of the move, the work, the pandemic, and whatever else is going on, I keep forgetting to take pictures of what I've read before I return or loan them back out. Clearly, I'm not so good at this whole #bookstagram thing.
Exploring my new neighborhood, and discovering the peacefulness of a cemetery full of flowers.