“The hilltop hour would not be half so wonderful if there were no dark valleys to traverse.”   – Hellen Keller 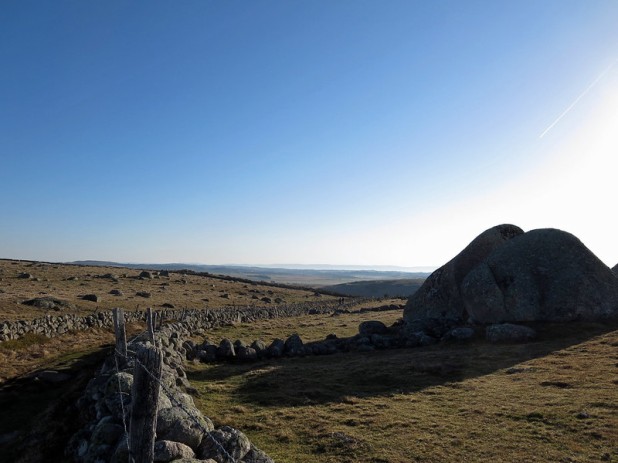 Walking through L’Aubrac was like walking through the legends and stories Eric read as a kid. Five days after leaving Le Puy, we reached the true highlands of the Massif Central, irregular rolling hills of open, treeless country. Eric and I were there in April, too early in the year for the herds of cows and sheep that would fill the pastures in summer, so the barren landscape was broken only by stone fences built from the rocks that dotted the landscape.

Eric took it all in with wide eyes and a permanent grin. The idea that a place like this was real made him happier, perhaps, than I’ve ever seen him. He’s a natural pilgrim, and possibly part mountain goat.

Me? Not so much. Five days into our journey, I was trudging along with my head down and my feet screaming. I resented every rock on the path that poked my tender, swollen arches. These were the Princesses at their worst. They sucked up my time, my attention, and my joy far too often in those early weeks. (A few of my more critical book reviewers would agree with that assessment.)

Looking back, I understand now that what I was feeling was a mixture of tendonitis and plantar fasciitis, springing from my ridiculously ill-considered choice of footwear and my lack of pre-Camino training with a pack (that extra 20 pounds makes an enormous difference on the joints). But I didn’t recognize any of that on the day we walked to Finieyrols.

The theme of today’s #CaminoTuesday is “Camino low points,” and despite the beautiful setting, this was mine.

We both were tense when we arrived at a cluster of houses too small to be a town, set dramatically in the middle of nowhere. Eric left me slumped on a bench while he got us checked into the gîte’s dortoir. After a few minutes of rest and foot massage, I rallied and plowed through my chores. Then I collapsed again on a boulder outside, soaking the late afternoon sun into my bare feet and letting myself imagine everyone’s reactions when I went home and confessed that I’d quit the Camino.

Because, obviously, I wasn’t up for this.

I sat on that rock and sulked. I wanted to cry. But did I really want to quit?

I’d known, intellectually, that this would be hard, but it had never occurred to me that I would have to stop. That I would want to stop.

That thought jerked me out of my sulk. Did I want to stop?

I dragged myself off the rock and down to the main building, where I bought a local beer appropriately called Antidote, tucked myself behind a picnic table, and finally looked around. It was stunning. The late afternoon sun cast warm light over hills that went as far as I could see in every direction. I watched two kids hanging over the fence at the edge of the property, trying to pet a couple of shaggy horses.

No. I wanted to be right where I was.

Yes, my feet hurt, but that didn’t change the crazy beauty all around me. We were in the middle of a remote area that few French citizens see, let alone two American tourists. I’d walked here, and unless those horses were tamer than they looked, I was going to walk out of here, too.

I was still a pilgrim.*

Most Camino pilgrims will recognize the feeling, because at some point along the way, I think we each ask, “Should I just quit and go sit on a beach somewhere?” Is this pain, or homesickness, or cultural discomfort, or whatever we’re facing worth it?

Not everyone says yes. Plenty of people realize that this long walk is not for them. But for those of us who stayed, we never forget the low point, or the lessons and resolve we discovered on the other side.

*Story excerpted and slightly adapted from the book

2 thoughts on “The Day I Almost Quit the Camino (#CaminoTuesday)”