In the US, it’s Veteran’s Day. We honor everyone who’s served in the military

To be honest, I’d never spent much time thinking about the First World War. The US was only part of it for a few months at the end, and it gets scant mention in our history books compared to the wars that followed. I had some vague impressions of men on horses charging men with automatic artillery. Gas attacks. Trench warfare. Millions of lives lost for a few feet of ground.

But until I went to France to walk the Way of Saint James, I didn’t have a context for it.

Every village we passed through alone the Chemin du Puy, from Le Puy to Saint James Pied-de-Port, had a prominent memorial to the fallen local heroes of the Great War. No matter how small or humble the towns were, they had recorded the names of their lost somewhere in the town center, or inside the local church, or in front of the Mairie (the city hall).

What struck me was that every town had lost people – there were dozens of names on most memorials, in towns of only a few hundred people. They were all young, usually eighteen to thirty.

They lost almost an entire generation.

There’s lots of time to think about things as you walk a pilgrimage, and I found myself thinking about those towns, and how much they must have missed the men who never came home. They lost brothers and teachers and fathers and friends. And they missed them deeply, and lovingly remembered each one of them by name.

They went with songs to the battle, they were young.
Straight of limb, true of eye, steady and aglow.
They were staunch to the end against odds uncounted,
They fell with their faces to the foe.

A few weeks later, our Camino ended in Finisterre, and Eric and I found ourselves with a few days of extra time before our flight back to the States. We spent the time visiting a friend who lives in northeast France. Mostly we rested, recovered, and tried to avoid a brutal heat wave. But one day, our friend took us to Verdun.

The Battle of Verdun isn’t as well known as the battle of the Somme (commemorated last year with this incredible memorial). But it was just as deadly. In less than a year, on less than eight square miles, 700,000 men were killed, seriously wounded, or declared missing.

German and French troops hurled chemical weapons, artillery, and their own bodies at one another day after day, leaving the landscape still visibly scarred. Most of the park is still off limits for visitors because of the risk of unexploded mines.

We walked where we could, saw the remains of trenches that had been full of soldiers when they exploded, burying everyone alive.

And then there was the Ossuary. Built in all the glory and grand scale of the Art Deco years, it’s tall and bold and geometric. The inside is what you’d expect, all marble and solemn tombs and eternal flames. 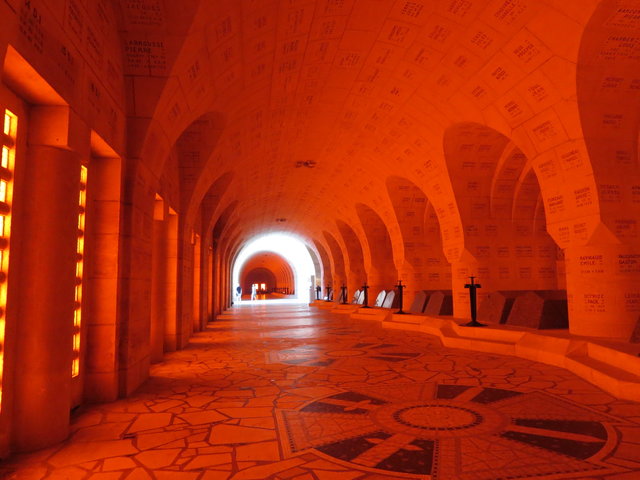 But outside, if you walk around the building and peer through the small, subtle windows near the ground, is where the real shock was. Because those are windows into the tombs themselves. If you crouch down and look in, which I innocently did, there are piles – PILES – of bones.

(No, there are no photos of the bones.)

It’s a shock to find yourself unexpectedly facing the messy human remains of 130,000 unidentified soldiers, both French and German. These are not artfully arranged memorials. They’re not even complete skeletons. They’re heaps of anonymous-but-very-human men, fractured and fragmented by guns and bombs and death.

The architects of the memorial, probably still reeling from their own losses (they broke ground for the ossuary less than two years after Armistice Day), refused to just hide them away, out of sight beneath the lovely marble tombs inside.

They shall grow not old, as we that are left grow old:
Age shall not weary them, nor the years condemn.
At the going down of the sun and in the morning,
We will remember them.

– “Ode of Remembrance” by Laurence Binyon

The small towns of France who named their lost sons brought me the personal heartbreak of the Great War.

The anonymous mass graves of Verdun brought me the horrific scale of the Great War.

Both made me see November 11 in a way I’ll never forget.

May we all never forget.

One thought on “Armistice Day”