My summer is in its full “manic mode,” with work and pre-release book stuff and social engagements filling up every corner of the weeks, and travel every weekend, and my poor Camino del Norte story sitting neglected here on the blog. I’ll get back to it, I really will. But before that, I need to tell you what happened last week:

I had the opportunity to meet one of the people who first inspired me to walk to Camino. 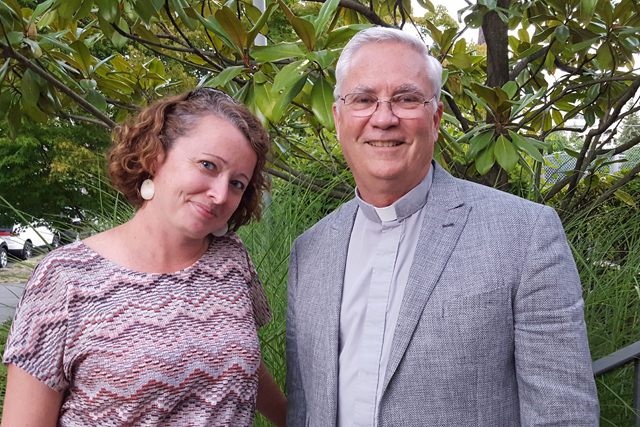 If you’re a reader who is interested in Camino stories and memoirs, you’ve probably come across Kevin Codd’s To the Field of Stars. (I first reviewed it a few years ago on this list of Camino Frances memoirs.) Published in 2008, Kevin’s whimsical, practical story of his long walk on the Camino Frances drew the attention of an English-language previously unfamiliar with the Way of Saint James.

“I am about to share here a story about stars that dance. . . . If the very thought of seeing stars dance piques your curiosity at some deep level of your soul, then pay attention to what follows, for the walk to the Field of Stars, to Santiago de Compostela, is a journey that has the power to change lives forever.”

(Kevin A. Codd, To the Field of Stars)

Then, about a year ago, I heard rumors that there was going to be a sequel. Father Codd (yes, Kevin’s a priest) had returned to the Way, and this time he walked through France.

Kevin Codd on a French route? Sign me up.

I pre-ordered Beyond Even the Stars, which released in February, and took my time reading it, finishing it the night before we left for Camino del Norte. 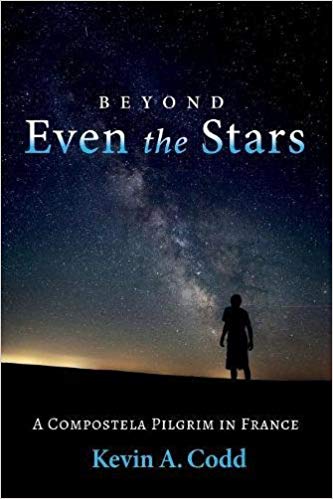 This was a different kind of pilgrimage story – not as much the joyful, communal walk across the heat of central Spain, surrounded by memorable characters and plagued by blisters. Instead, this was a quieter, introspective story. This pilgrimage starts not with a train trip to a common gathering point, like most of us have, but right from Kevin’s front door in Belgium. There are no other pilgrims to keep him company here, far away from the marked, historical routes. There are no rushes for beds in albergues; in fact, Kevin is almost always the only pilgrim in the refugios that exist, scattered few and far between.

In the place of those familiar themes, though, Beyond Even the Stars is full of devotional contemplations about life, faith, nature, and family. And there are even deeper moments of loneliness.

There are setbacks on Kevin Codd’s long walk to Compostela…to say more would be a spoiler. But the honesty that he brings to his unexpected detours are what make the story worthwhile. The more I talk to people who walk The Way, the more I see that most pilgrimages don’t unfold quite as expected, but that doesn’t make those experiences less important…or less holy.

As I read, I found myself marking passage after passage.

“I hear a swelling swoosh; from the south a bullet train whizzes into view on the tracks, knives through the landscape in a matter of moments, then disappears with a whoosh. It has just covered in a few seconds what has taken me hours to walk. That very fast train reminds me that, as a pilgrim, travel is made holy in its slowness. I see things that neither the passengers of the train nor the drivers of the automobiles see. I feel things that they will never feel. I have time to ponder, imagine, daydream. I tire. I thirst. In my slow walking, I find me.”

(Kevin A. Codd, Beyond Even the Stars)

When it was time to seek out endorsers for Walking to the End of the World, I approached Kevin with more than a little nervousness. I mean, this was THE Camino memoir writer! What if I did something embarrassing?

Well, Kevin was quick to respond and gracious enough to agree to endorse, even though, as he gently pointed out, I’d done SEVERAL embarrassing things, including a pretty major mistake in explaining the story of Saint James himself. (Which, thanks to Kevin and the quick work of Mountaineers Books to fix the page proofs, you’ll never see.)

Despite that, here’s what he said:

“Beth Jusino doesn’t pull any punches in her vivid and engaging account of the pilgrimage she and her husband made, but happily she also shares with us her small victories and the many lessons she learns about herself, her marriage, and just plain life. Perhaps most universal of those lessons is contained in her ‘Santiago Moment’ near the end of the book: gratitude!”

I’m all tingly just reading it.

In our exchange about the book, Kevin mentioned that he was going to be in Seattle in July, at the appropriately named St. James Cathedral, for a reading of Beyond Even the Stars, and would I like to come? Well, of course!

In person, Kevin is the same warm, funny, whimsical, faith-filled person that he is on the page. His audience filled the parish hall and peppered him with questions. He patiently stayed and signed books and chatted with visitors long past the time he should have gone off to dinner. And he did it all, it’s clear, because he loves the Camino.

“To feel the pull, the draw, the interior attraction, and to want to follow it, even if it has no name still, that is the ‘pilgrim spirit.’ The ‘why’ only becomes clear as time passes, only long after the walking is over.”

(Kevin A. Codd, Beyond Even the Stars)

If you’re curious about the idea of pilgrimage “off the beaten track,” or experiencing the history of pilgrimage through the eyes of someone who’s dedicated his life to God, this book is for you.

(It’s available online wherever books are sold, including Amazon, Barnes & Noble, and IndieBound.)

New shades of green, new signs of spring. #seattleparks #stetwalk #carkeekpark #spring #optoutside #nature #seattle #pnw #soclose #hikelikeagirl
Need a feel-good story to get you through Wednesday? I came to work with a to-do list a mile long. I needed to focus. I needed to answer email. Instead...yeah, I opened Facebook. And there, at the top of my feed, was this photo, posted in a Camino group I haven't visited in a long time. "Oh, cute cat," I thought. (pause) "Oh, hey, that's my book!" 😲 😲 😲 And just look at Joee's words: "After having driven up the hill to hike in the beautiful woods of NorCal, I stopped in my favorite bookshop in Truckee, CA: Word After Word Books. Behind the counter stood a very friendly woman who found for me that which I sought. However, even in the infancy stage of this perhaps pipe dream of embarking on the Camino, I learned something about myself. Just asking the question, “Do you have any books about the Camino?” caused me to doubt myself. I said it quietly, quickly and waited for no one else to be standing at the counter when I asked it.... There was no sarcasm. There was no judgement. There was excitement in her voice! There was anticipation and awe! There was a belief in me that I didn’t even have for myself! Who knew the Camino would be teaching me things about myself before I had even set foot on that sacred dirt?" 😍 ❤️ 😍 I love this so much, for so many reasons. So here's to every woman (and guy) who's sitting there on a Wednesday, wondering if this Big Thing their heart wants to do is totally crazy, and if people will judge them for launching an adventure. Here's to the #solofemalehikers and the #womenonadventures and the #pilgrims around the world. 👍 👣 🙌 And also, here's to the #independentbookstores who cheer them on and pair them up with the resources they need. (@wordafterwordbooks, thank you for the part you play in this story!) 📚 ❤️ 📚 #authorsofinstagram #books #caminodesantiago #wednesdaymotivation #catsandbooks #walkingtotheendoftheworld #camigas
"We need to be reminded sometimes that a sunrise last but a few minutes. But its beauty can burn in our hearts eternally." (R. A. Salvatore) 🌄 🌄 🌄 Anyone who’s met me knows I am not a morning person. I don’t often see the sun rise, nor do I want to. (A more accurate quote for me might be the one from Nanea Hoffman: “Today’s goals: Coffee and kindness. Maybe two coffees, and then kindness.” ☕ ☕ ☕ But on the Camino de Santiago, I saw the mornings. Not only was I awake, but I was outside, moving through the light as it gathered and changed. Sunrise in the open places of Spain is something not tobe missed, even for a night owl like me. ☀️ 👣 😲 Today’s theme for #CaminoTuesday is “first light,” and it has me thinking about all of the early mornings, from my very first morning in Le Puy, to the day we walked out of Santiago de Compostela toward Finisterre and turned to watch the sun rise over the cathedral, now to the east. ⛪ ❤️ Do you have a favorite photo of the first light of a Camino morning? Post it and tag #CaminoTuesday, and let's move this Twitter trend to Instagram! ☀️ 😍 #womenonadventures #sunrise #pilgrimage #Spain #theway #firstlight #walkyourownpath #traveldeeper #allwomenalltrails #caminomemories #takeahike #walkingtotheendoftheworld #traveltuesday #CaminoFrances
We've reached the part of winter where a mostly blue sky is so unexpected that I have to take a picture. (And a quick walk around Green Lake.) ☀️⛅☀️ #seattle #greenlake #sunnysunday #sundaystroll #wintersunshine #afternoonwalk #pnwlife
I started something new today. It's not related to words or computers or writing or editing (or hiking or travel or anything else "on brand." ) It's not something I need to try to sell or market. It's kinda dirty, and fun, and so far I'm completely terrible at it. But it might just be the thing that gets me through the winter. #trysomethingnew #pottery #potterywheel
I don't #bookstagram every book I read (I probably should, but the staging and lighting stresses me out). But this one's kind of special, and not only because we've had a 4-year relationship. I started Chernow's biography of Alexander Hamilton in 2016, at the peak of my #Hamiltonmusical fandom. I blasted through the first half, reveling in the courage and bravery and intelligence involved in creating a new nation out of almost nothing. Chernow blends facts with quotes and just enough commentary to make his books read like novels, and the famous faces of history come to life. But then my life (and library books with due dates) intervened, and I put it down, and didn't pick it up again in 2020--a time when the national mood is, to put it gently, less hopeful or optimistic than it was in 2016. And I found that the founding fathers had surprisingly similar trouble holding onto hope, as well. *** (insert inevitable musical reference: "Winning was easy, young man. Governing's harder.") *** Is it encouraging or discouraging to know that America has fought waves of "propaganda barrages" and partisan hypocrisy since the very beginning? To know that not even the heroes--Jefferson, Adams, and Washington himself--were above letting their pride and desire to win blind them to compromise? I don't know, but I do know that Chernow's bio feels more relevant today than it did 4 years ago. And I hold onto Jefferson's words about the (now extinct) Federalists: "A little patience and we shall see the reign of witches pass over, their spells dissolved, and the people, recovering their true sight, restoring their government to its true principles." *** I'm glad I didn't throw away my shot (couldn't resist) to read it. #book #hamilton #historygeek #amreading #alexanderhamilton #booklover #ronchernow #thomasjefferson #wednesdaymood