I was sitting in a restaurant this week, waiting for friends to arrive and half watching the giant TVs overhead, when a report on a bull jumping a fence in Spain caught my attention. Perhaps you’ve seen it? During a festival in Caparroso, Navarre, a bull released into a ring made a mad dash for the corner, hurling itself over a wall and continuing out into the street. (The story has a reasonably happy ending: no one was seriously hurt, and the bull made its way out of town and into a nearby river, where it was captured and loaded into a lorry, presumably never to be sent into a ring again.)

It reminded me of a story I haven’t told here before, about the night in Los Arcos where I watched a similar, but less newsworthy, bullring festival.

In August 2017, I returned to the Camino Frances to walk for a week with my friend Laurel, who was setting out on her first Camino. We started in Pamplona, and on our third day, we arrived in Los Arcos in the company of a new friend, Saskia from the Netherlands. (Los Arcos, for those of you who followed my first Camino journey either here or in the book, is the home of the Church of the Sensory Overload.)

We arrived footsore and tired and maybe a little cranky. It was 2:00 in the afternoon, but I’d been pushing the pace, worried about not having a bed in the albergue. (I’m a worrier. Every day I was with Laurel I pushed her past her pace to make sure we arrived early, and every day, we were among the first to check into the albergues. We never came close to not having space, and Laurel is a saint for putting up with me.)

As the three of us started to wind through the narrow streets of town, I noticed that something was different from when I was there in 2015. There were wooden barricades nailed to every door and ground-floor window. It was almost as if they were preparing for…bulls?

A few minutes later, we heard the sound of a band, and then the narrow street was engulfed not by running beasts, but by gigantes and cabezudos (giants and big-heads), the classic costumed participants of many Spanish festivals. They were part of a parade or procession of laughing, talking, happy neighbors all dressed in white and red.

The creepy clowns swung their mace-like balls at us as they passed, and the whole thing was over in seconds. One of the things that was apparent right away is that these festivals are not tourist events. They’re not put on for the Camino pilgrims or the British tour vans passing through. Pilgrims were welcome to watch, of course, but we were mostly ignored (as it should be…these communities offer a lot to the passing strangers with backpacks already).

This is a local celebration of…well, I never did figure out what. Can anyone help me out here? The white clothes and red scarves popped up in many parts of Navarre, and at times I was told they were tied to San Fermin, or to local patron saints, or…???

The walking parade didn’t explain the fences, though, and as soon as we were settled in the albergue (of course there was plenty of room), I limped back to the town square to see what I could find. A Brazilian woman I’d met a couple of times told me that there was a temporary bull ring about a block away, in a place where I distinctly remember a parking lot two years before. By 6:00, the plaza was shutting down, the restaurants were pulling their tables inside, and more fences were going up. We followed the crowd to the ring and squeezed onto one of the rapidly filling benches, close-but-not-too-close to the front row. Saskia and later Laurel joined us as the shows started.

First, I should say that this wasn’t bullfighting. It was bull running in a ring. Teenage boys and young men jumped into the ring to play chicken with a collection of animals carefully watched by the bullring manager, a serious man who stood by a gate near us. To be honest, mostly the bulls looked bored, and not all that interested in the kids amped up on testosterone and beer. But every now and then the manager would make a low whistle, and a bull would gather himself and charge, scattering the boys who scrambled fences to get away.

I got the sense that these bulls had done this routine a few dozen times already, in villages all over Spain. Which meant, I was relieved to see, meant that no one was going to kill them for sport. But bored bulls don’t make for much of a show. (Well, unless they start jumping the fences, I guess.) 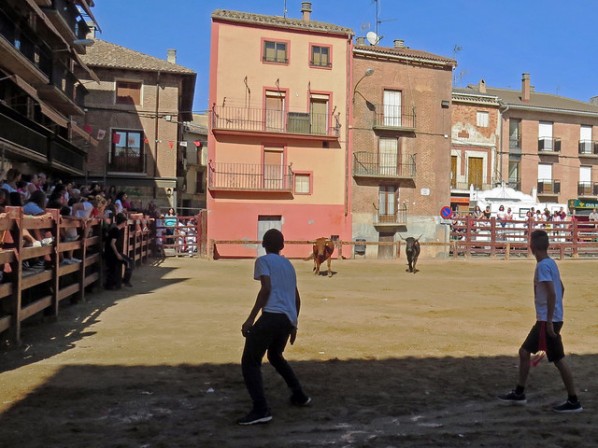 Our pilgrim group wandered off after a couple of hours, during a break in the show when a truck pulled in to load the tired bulls and unload some new ones. It was late by Camino standards, and we were hungry. But the show kept going—and seemed to pick up in intensity—after we left. An ambulance raced out of an alley with lights blaring while we ate dinner in the plaza, and some friends who stayed at a hotel in town reported that the bullring was busy and noisy until the wee hours of the morning. Because even the smallest villages of Spain, it turns out, know how to throw an all-night party.

When I first started planning to walk the Camino, my only exposure to bulls in rings came from Bugs Bunny cartoons. Now, I’ve sat ringside, surrounded by friends from 3 different countries, laughing at the antics and learning about the culture. I’ve danced with giants, been chased by clowns, and prayed for the safety of both boys and beasts.

2 thoughts on “A Night at the Bullring”