A few days after Eric and I started walking from Le Puy, with 10 weeks of walking still ahead of us, we were already talking about how to come back and do more of this. After all, “the Camino” isn’t a single trail, but a web of paths that criss-cross Europe, branching back as far as Italy and Geneva and winding in from every corner of Spain. There was so much to see.

Taking another 3-month sabbatical wasn’t in the cards (or the bank account) for a while, but by last summer it was reasonable to start planning a 6-week trip. I’ve spent the past year reading up on the Norte, the Primitivo, the Portugues, and the French routes from Arles and Vezelay. We have an abundance of options.

After seeing the incredible photos and stories from my favorite travel bloggers Uncornered Market and Nadine Walks, we decided that we would start on the Norte and then cut down to the Primitivo.

It was going to happen in Spring 2017…you know, right about now. But in January, when my feet were still giving me trouble and my work calendar was filling up, we decided to put the trip off to fall. We’d see Galicia during a different season.

But sometimes good things get in the way of good things. A couple of months ago, Eric accepted a new job. It’s a good position with a great organization, and overall, it’s a win. But they weren’t too excited about him taking a 6-week sabbatical just 6 months after he started.

The Norte walk is delayed again, this time until sometime in 2018.

But if my first Camino taught me anything, it’s that sometimes the real magic happens when I’m not planning, or even looking for, it.

Which brings me to Laurel.

This is me and my friend Laurel. Ever since Eric and I got back from Spain in 2015, she’s been talking about walking the Camino. Specifically, she wants to walk the Camino Frances to celebrate a milestone birthday, which happened last month.

But the person she planned to travel with can’t go this year. And Laurel had some hesitation about traveling alone.

Which is how I found myself, about a month ago over dinner, blurting, “If you really want to do this, I’ll go with you.”

Laurel and I will fly to Madrid on August 12 and start walking from Pamplona two days later. I’ll tag along for about 9 or 10 days, as far as Burgos, and then I’ll go back to Madrid and head home, and Laurel will continue across the Meseta.

Reasons why this is magical:

Reasons why this is scary/challenging/different:

But overall, this is all I’m thinking about right now (click to see bigger photos): 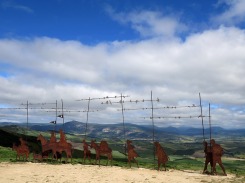 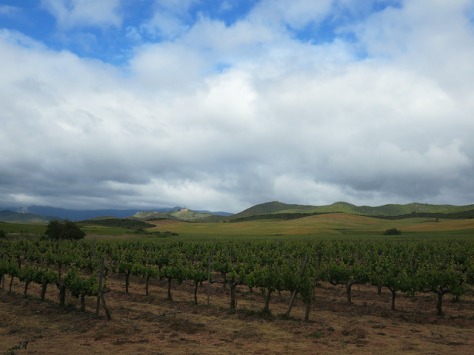 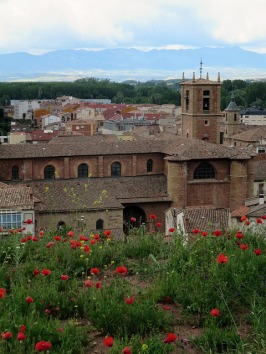 Well, that and the tapas. And the Rioja. And the people.

Question: have any of you rented bikes on the Camino Frances? Laurel is considering renting a bike in Burgos and riding the Meseta (probably to Leon). Any advice or recommendations?

16 thoughts on “It’s official! Camino 2.0: My Surprise Return to Spain”