Today’s #CaminoTuesday theme* over on Twitter is “Camino After Dark.” That struck me as a trick question at first, because Camino pilgrims rarely stay awake long enough to do much after dark. (Travel tip: Pilgrimage is not the way to experience European nightlife.) But then I remembered a night in Conques, just 10 days into my first Camino on the Via Podiensis…which means it was April in the mountains of France, and so the sun set early. 🙂

Conques has been a popular stopping point for pilgrims for centuries, ever since the monastery “acquired” the relics of Sainte Foy (Saint Faith) in 866 – a story of larceny and piety I’ve shared before. The Abbey of Sainte Foye now hosts a gite in the 11th century monastery, where of course Eric and I stayed. After a cheerful communal dinner and a quiet, emotionally charged, echoing compline service in the cathedral, a priest led us all outside to explain the elaborate tympanum of “the last judgment.”

(A tympanum, for those readers who are as unfamiliar with architectural terms as I was that night, is the decorative wall surface, usually semi-circular or triangular, over a door or entrance.) 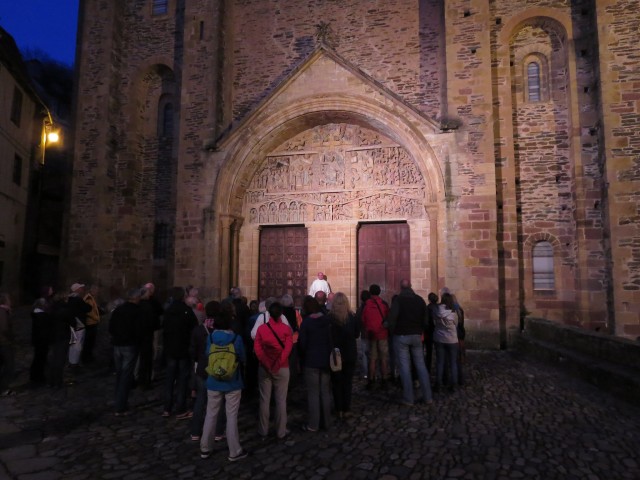 I understood almost nothing he said (my French was still almost non-existent), but the images themselves told quite the story, and it was fascinating to watch the crowds move through the chilly spring night.

When I got home, I read more about the cathedral, the history, and especially the artwork–because by then I’d learned that medieval artists knew how to tell a good story.

There is little exterior ornamentation on Conques except necessary buttresses and cornices. The exception to this is the Last Judgment tympanum located above the western entrance. As pilgrimages became safer and more popular the focus on penance began to wane. Images of doom were used to remind pilgrims of the purpose of their pilgrimage.

The tympanum appears to be later than the artwork in the nave. This is to be expected as construction on churches was usually begun in the east and completed in the west. The tympanum depicts Christ in Majesty presiding over the judgment of the souls of the deceased. The cross behind Christ indicates he is both Judge and Savior. Archangel Michael and a demon weigh the souls of the deceased on a scale. The righteous go to Christ’s right while the dammed go to Christ’s left where they are eaten by a Leviathan and excreted into Hell.

The tortures of Hell are vividly depicted including poachers being roasted by the very rabbit they poached from the monastery. The tympanum also provides an example of cloister wit. A bishop who governed the area of Conques but was not well liked by the monks of Conques is depicted as being caught in one of the nets of Hell. The virtuous are depicted less colorfully. The Virgin Mary, St. Peter and the pilgrim St. James stand on Christ’s left. Above their heads are scrolls depicting the names of the Virtues. Two gable shaped lintels act as the entrance into Heaven. In Heaven Abraham is shown holding close the souls of the righteous. A pudgy abbot leads a king, possibly Charlemagne, into heaven. Sainte-Foy is shown on the lower left kneeling in prayer and being touched by the outstretched hand of God. Particularly interesting are carvings of the “curieux” (the curious ones), forerunners of the World War II-era cartoon image known as Kilroy, who peek over the edges of the tympanum.

The tympanum was inspired by illuminated manuscripts and would have been fully colored, small traces of the color survive today.

Rabbit poachers pudgy abbots, and some rather graphic depictions of hell… this was the day I started to understand we don’t give the Middle Ages enough credit for their humor.

*  #CaminoTuesday is a hashtag initiated by Oxford Medievalist Anne Bailey. Each week, a new theme is announced, and people from around the world share their pics and memories that relate. If you’re on Twitter, follow the hashtag, @AnneEBailey1 or me, @bethjusino.