This morning I spent a delightful hour talking with two authors I admire, Richard Frazer (Travels With a Stick)  and Ian Smith (Stepping Out). They’ve both thought deeply about the meditative and spiritual aspects of pilgrimage, and were gracious enough to allow me to join them next week in a free, public Zoom discussion about Pilgrimage in Pandemic, hosted by the Heart Edge program of St. Martin-in-the-Fields in London. (You’re all invited. Click here for details.)

I’m not sure where next week’s conversation will go, but today I found myself talking about the challenges I’d had when the lockdown started. How I’d had that wide-eyed, shell-shocked feeling of being lost, both culturally and physically. How the last time I’d felt this out-of-balance was on my first Camino, when it took a few days to sort out the new normal and to slide into a rhythm of walking, daily chores, and unfamiliar beds.

And how in a communal gite in Saint-Côme-d’Olt, with the words of a kind host, it all came together.

He’d hit on one of the things that had been scratching at my mind all week. We walk, we eat, we sleep. Is this it?

According to Sylvain, yes. And the way he said it, it was enough.

(from Walking to the End of the World) 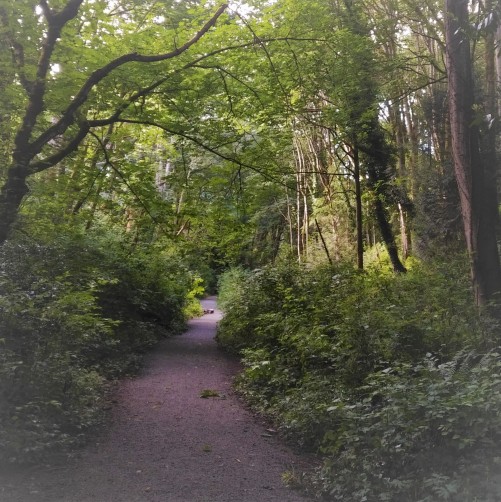 For the past decade, Eric and I have chosen to live in small apartments (lower cost, less maintenance, smaller environmental footprint), which has worked well mostly because we’re so rarely home. But then the pandemic struck, and I was here All. The. Time. (Eric’s job is on-site and essential, so he left everyday.) My options, on the other hand, shut down seemingly overnight…except the parks.

Side note: I cannot stress enough how important public outdoor spaces like parks are for people who don’t have the luxury of a private yard.

So every day, after I put in my day-job hours of Zoom calls and staring at screens, and before I settled into another quiet night at home, I’d walk for an hour or two on the wooded trails and beaches of Carkeek Park in north Seattle.

Day after day, and it starts to be a meditation.

It wasn’t a traditional pilgrimage. I wasn’t moving across unfamiliar space each day toward a sacred destination. Most of the time, I didn’t even have a destination. But my park walks were—or at least became—meditative in their own way. I was moving and living at a human pace again, rather than rushing from appointment to appointment, and gathering to gathering. For one of the first times since my 2018 Camino, I had more time than I needed and nothing to do but linger and look, if I was only willing to put aside my headphones and pay attention.

The turning point came about a month ago. I was on a small, narrow side trail that was rarely traveled, and at one point I stumbled a bit on a root and brushed against a salmonberry bush. To my surprise, a hummingbird burst out from under the leaves just above my head and started buzzing around me, chirping sharply.

Knowing what that probably meant, I started peeking between branches, careful not to touch or disturb anything, until I found the hummingbird’s nest just a bit higher than my head. I held up my phone to grab a couple of quick pictures and then retreated to give the mama bird her space.

When I looked at the pics later, there was something I’d never seen before: eggs.

And not just eggs, but eggs that were already hatching.

When I went back two days later and held up my camera again (to catch what I was too short to see), there were already little worm-like babies.

And so it began. My walks had new purpose. I followed that little side trail every other day (not wanting to put too much pressure on the tiny family) and documented the growth of two new hummingbirds as they transitioned from jelly-bean-sized worms, to spiky and blind adolescents. I saw their beaks develop and their feathers grow. 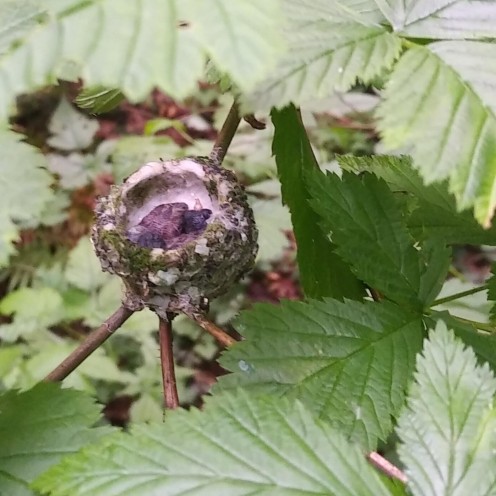 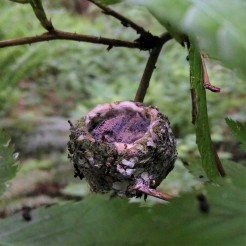 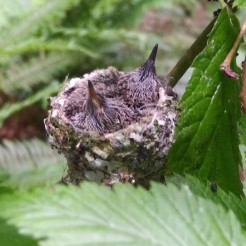 In the midst of what felt like a season marked by fear and retreat, I was journeying on foot every day to see something grow.

Is that a pilgrimage? Perhaps not by the technical definition, but it was certainly a journey to something I found holy.

According to the experts, hummingbirds fledge between 23-28 days after hatching. On Day 21, I visited and found wide-eyed birds. Four days later, I found an empty nest. The babies were no longer babies, but fledglings out exploring the world.

As I, too, am slowly beginning to do again, but with a new form of pilgrimage tucked into my pocket of memories.

How about you? Are you on some kind of pilgrimage in place?

PS. Hummingbird nests are a lot smaller than these pictures may seem:

4 thoughts on “Pilgrimage in a Time of Pandemic (and Hummingbirds)”