Did you miss me? It’s been quiet on the blog, and on the book-writing front, for a few weeks. That usually happens when things are noisy elsewhere.

My day job of writing, editing, and teaching has been frantically busy all month. It seems like every time I try to set aside time for my own writing and projects, I get that email with a can’t-say-no request. (Not that I’m complaining…I’ve gotta make enough to pay for the next Camino.)

In the middle of that, though, I started to receive another set of emails, these coming from my family on the other side of the country. My 91-year-old grandmother’s health went from good to bad quickly, and ten days ago, she passed away. With just a few hours’ notice I hopped on a plane with Eric and my sister, and we flew home to New Jersey for the memorial services. It was a bittersweet time, celebrating with family the life of someone we all dearly loved. The last time I saw my grandma Eric and I were just starting to plan our Camino adventure, and I told her all about the adventures ahead. I didn’t see her in the months since we’ve been back to share all of the stories and photos, but I know she was cheering, and praying, us on.

We came back to Seattle just in time for Eric and I to pack and head out again, this time for a long-planned anniversary weekend in the outdoor playground town of Squamish, BC. More on that in a minute.

Because in the midst of all this, Facebook keeps giving me those “one year ago” photo flashbacks. And one year ago, we were in the middle of the Meseta.

Eric and I spent our 14th wedding anniversary walking from the shiny, modern Albergue Los Templarios in Teradillo to the sleepy, almost eerily deserted town of Bercianos del Real Camino, passing through Sahagun–traditionally considered the halfway point of the Camino Frances–along the way.

It was blisteringly hot when we arrived with Nic, from Switzerland, and Vivianne, a Korean exchange student who’d been living in Spain for the past year. We followed the yellow arrows painted on the empty streets to Albergue Santa Clara, where we snagged the last two dobles (double rooms with two twin beds). The dormitory area was already full.

Before you start thinking that a doble would offer some anniversary-appropriate opportunity, I should mention that those lovely yellow walls between rooms only went about three-quarters of the way to the ceiling, and the rooms were closet-sized. Still, though, those are real sheets on the beds, and real towels on the table. These are not luxuries a pilgrim takes lightly.

I took a short walk around town, only to find it deserted. Many of the buildings, long and close to the ground, were made of mud bricks, and you could see the straw that held them together. It felt like one of those dream sequences in the movies, where you walk through a deserted landscape, hyper-saturated with color but completely silent. The only person I saw was an old woman, in traditional black dress and headscarf, sitting on a bench outside an open door. She was completely still, never acknowledging me and not even blinking as I walked by. The more I think about it, the more I wonder if I imagined her. It was that kind of place.

I returned to my friends, who were sensibly sheltered under giant umbrellas in the albergue courtyard, drinking one-euro beers from the vending machine and getting to know our fellow pilgrims—a mother, aunt, and daughter from Mexico. We passed an easy, lazy afternoon hiding from the sun, swapping stories, and watching the household chickens peck at a watermelon. We finally ventured out to the only bar in town for an uninspired pilgrim dinner of lomo (fried pork) and the always-present patatas.

The food may not have been much, but our international pilgrim cohort made a cheerful table, and I couldn’t have hoped for anything better. 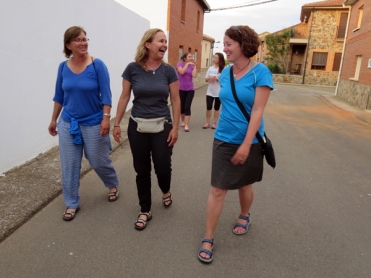 And in the “be prepared for the Camino to surprise you” tradition, the morning after our blah dinner, our hosts provided the most elaborate breakfast spread that we found anywhere on the Camino. We feasted on a variety of breads, cereals, yogurts, juices, eggs, fruit, and more. Most albergues don’t even bother with breakfast, but this family overflowed with generosity.

So that was a year ago. This weekend, Eric and I spent our 15th anniversary weekend on foot once again. (Once you catch the bug…) Instead of walking a long, flat day across the Spanish Meseta, though, we were in British Columbia, Canada, climbing the short but almost vertical trail up to the south peak of “the Chief.” (They called it an intermediate hike, but anything that gains 600 meters in 3 kilometers, and requires ladders and chains, is a climb in my book. This thing made the Day in the Pyrenees look easy.)

I wore my Camino pants, though they don’t fit the way they did a year ago. Pilgrims, beware the post-Camino weight bubble; this time last year I needed a belt to keep my pants on. This weekend…not so much. Of course, instead of a pilgrim menu, I had an enormous stone-oven-baked pizza loaded with cheese and pesto….at a brewery…with very tasty beer. So maybe the bubble is just me.

Life keeps carrying us forward…and we keep living the lessons learned along the Way. We remember. We celebrate. And we keep walking.

4 thoughts on “Our Meseta Anniversary”