I had the luxury for the past couple of weeks of working on the book-in-progress almost every day. I’m slowly peeling away the layers of the story, and discovering more about my own journey as I try to share it.

One of the themes that’s coming out is that the most meaningful moments were not the ones I expected or planned for. The much-hyped towns (even Santiago itself) weren’t my favorites. Instead, what I remember are the nights when we stopped in a town that seemed less-than-inspiring, and then discovered it was full of friends.

In the town of Miramont Sensaq, we stayed in a gite run by the local Amis de Saint Jacques—the Friends of Saint James—who serenaded us with folk songs and local instruments, and after a generous dinner led us in a rousing round of Ultreia before sending us off to our clean but crowded dorms.

The pilgrims around us that night all discussed the option of a shortcut in the next day’s walk. We could follow GR65 as it wound through the fields, they said, or we could cut three kilometers off our total path by following the road to the next village, and picking up the path there.

For the past three weeks, if anyone said “shortcut” I would jump at it. But there was something about this country, and about my hope for my new shoes, and the growing sense that our opening act on the Way of Saint James was drawing to a close. Whatever it was, when the crowd of pilgrims turned right the next morning, Eric and I followed the red and white arrows on the Way to Saint Jacques and turned left.

GR 65 crossed pastures and skirted hills, and we were far from any kind of road or village when we came across the chapel. Small and weathered, with tiles missing from the roof and patches of stone visible in the thick, unadorned walls. It didn’t look like anyone had visited, let alone worshiped here, for centuries.

And yet of course it was unlocked.

This was one of the gifts of the Camino in France. Wherever we were, whether it was a famous cathedral or a tiny chapel by the side of the road, it was open. There was rarely anyone but us inside, but there was always a guest book, and we could skim through to see who had come before us.

The guidebook had a passing reference to this place, the Eglise de Sensacq. It had been a local place of worship eight hundred years ago, was rebuilt after the Wars of Religion, and wasn’t a major stop for the original pilgrims.

That’s for sure. This was not a cathedral built for show. There were no gilded altars, or icons of saints and martyrs. There was no stained glass. There was a Baroque plaster statue of the Madonna and child, but both were, kind of creepily, missing hands.

And yet the place pulled us in. We shed our packs and poked into the corners of the single room chapel, carefully navigating the uneven stone floors to look at the much used fireplace in the sacristy, and the dry stone basin by the door. We studied how the light coming through plain windows set into thick stone walls bounced off the exposed beams of the arched ceiling.

We noticed the flowers, both fresh and fake, scattered around the altar. Someone visited this place. Someone cared for it. 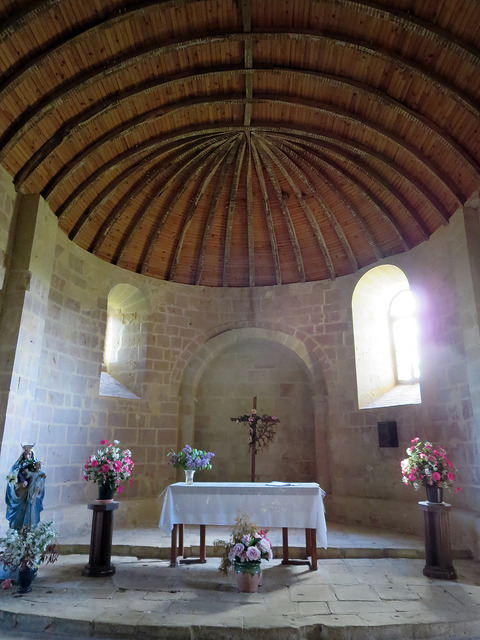 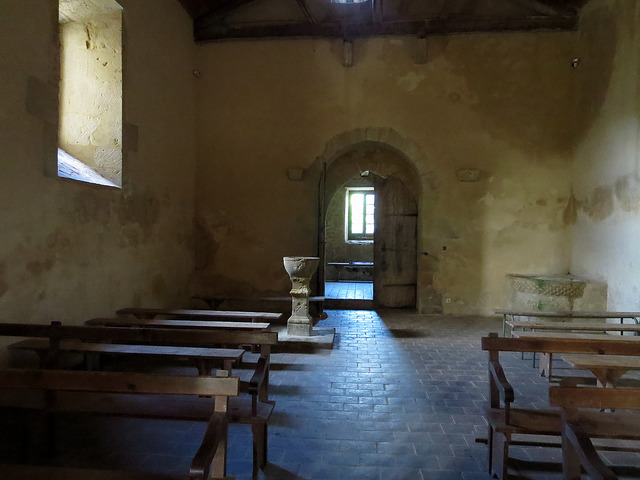 Maybe it was the feeling that this was real, that there was no recreation or renovation here. This was how people lived and worshiped (and perhaps still do? Someone was caring for that altar…).

That peaceful little corner was one of the most beautiful places of my Camino.

And we would have missed it if we’d taken the shortcut.

Book update: the first half is drafted, and the proposal is (finally) done. Now things start getting serious. If you’d like to know more about what happens next, including the occasional chance to be beta readers for not-published-anywhere-else chapters, and be the first to know when there’s an actual publishing plan in place, please sign up for my “Book Club” mailing list here.

5 thoughts on “The Chapel in the Middle of Nowhere”